Remembering the potential of virtual creativity

There are times in Second Life when the graphics seem as crude as Minecraft, the big art installations look like my doodle-covered teenage notebook come to life, and the extent of imagination appears to be choosing a pose from a menu. But then when you’re least expecting it, you can be swept away. 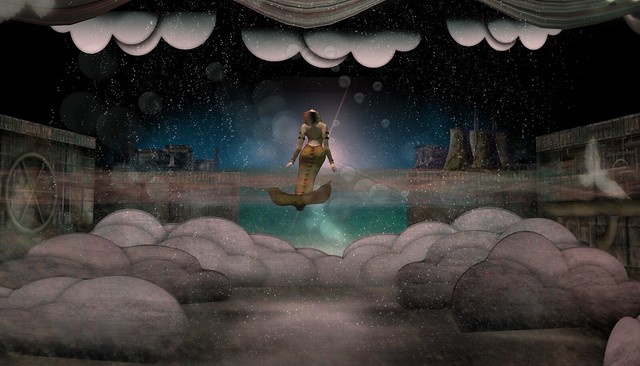 Yesterday while I was in the midst of some virtual landscaping (a lot less messy than RL), a new friend asked if I’d like to come along to a performance art show. I answered, “Sure!” before contemplating what exactly “performance art” could mean this time. I was in for a wonderful surprise.

The show was at the Lady Garden Cabaret and it was stunning. It was assembled like classic cabaret, where each performer has a self-contained act, but all of those acts aligned with a theme. This month, the theme was “enchantment” and specifically Peter Pan, thus the show had a flying Pan, dancing pirates, fairies galore, a sexy crocodile (yes indeed), and a mermaid. The performers exploited many advantages of the virtual world, plopping an entire ship into the theater, taking us underwater or into the sky. I snapped a few photos. As usual, these are not PhotoShopped or altered except for cropping, and I didn’t change Windlight settings or sun position. The photos are far inferior to the live experience, where everything was in dazzling motion and accompanied by a cleverly chosen soundtrack. What you see is only a fragment of what you experience in person. (Clicking an image will take you to a larger version on my Flickr stream.) 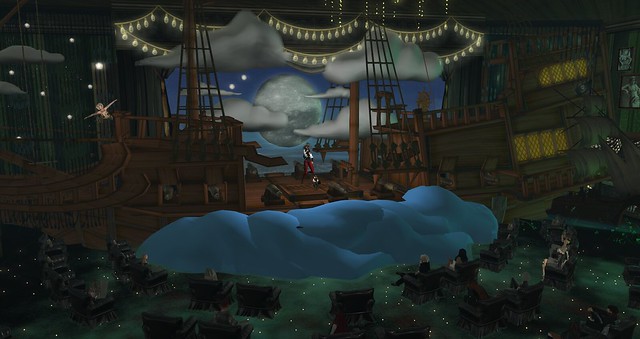 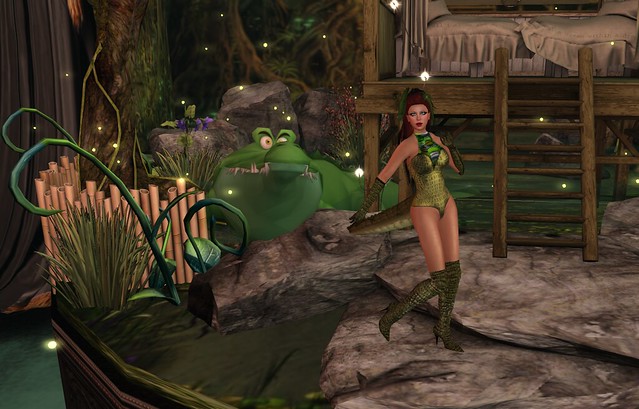 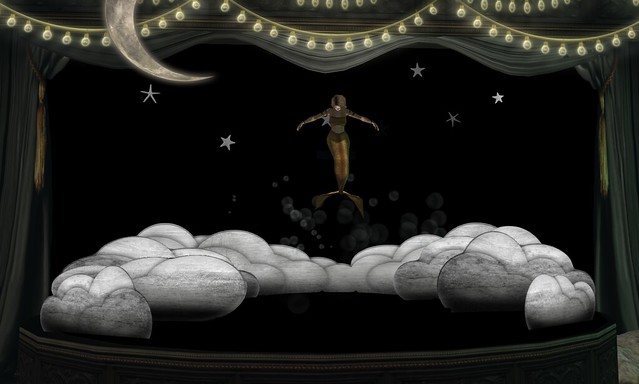 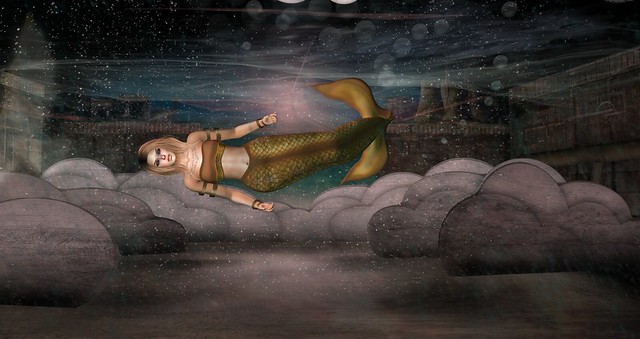 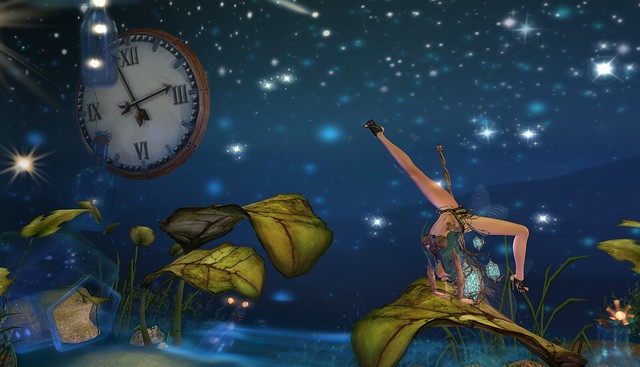 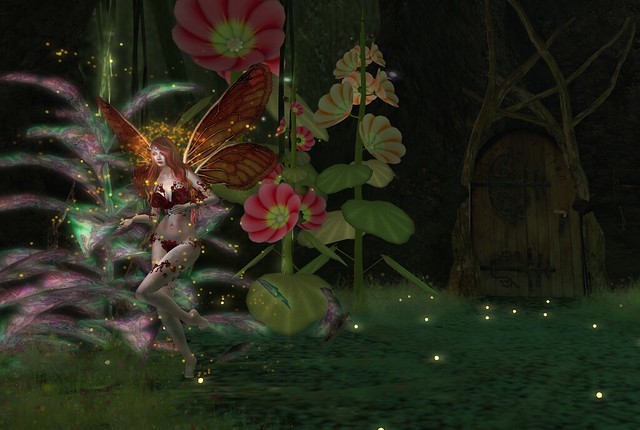 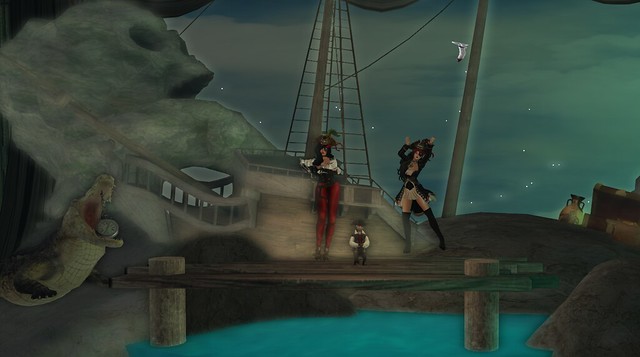 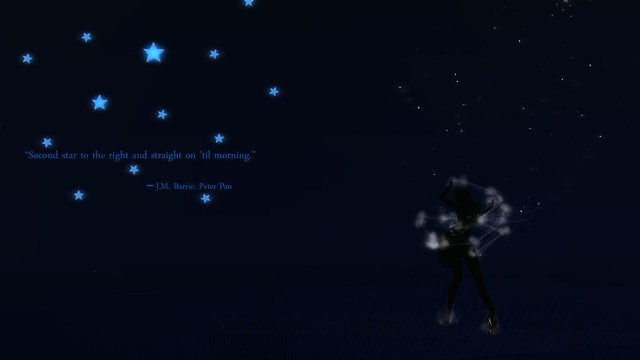 Some of the acts were very good and others were jaw dropping. I wish I was quick enough to make notes and name the members of the Minxettes troupe that appeared, but I was too busy enjoying the show. I’m glad my friend mentioned that Misse uses a lot of particle effects so that I knew to adjust my graphics for her mermaid segment, which was breathtaking. And yes, it should be said that there were some Second Life irritations like lag and slow rezzing. The overall show was so good that those didn’t distract much.

As I was camming around between numbers, I saw a poster advertising that the show was looking for performers. The skill required is far more than the “spin around a pole choosing from a menu” style, as the artists provide their own sets and choreography. Wow. How I wish I had the talent for that, but clumsy me can barely jump onto a poseball without breaking a virtual nail.

The Lady Garden Cabaret is located at http://maps.secondlife.com/secondlife/Pegasoi/122/111/222 and I believe their next regular show is December 18th. Stop by and smack the subscriber to get updates on future performances or visit the Lady Garden Cabaret blog. I’ll make a point of going back with plenty of $L to stuff into the tip jars for the talented artists. They reawakened my sense of wonder and potential in Second Life.

I couldn’t choose, so you get a few minutes of a live performance by a Japanese electropop trio and then an hour-long talk from one of the most influential thinkers in consumer robotics today.

According to this WIRED piece, the Perfume video below was filmed in real time (with a large tech team and a 3D scan of the venue pre-made).  Still, none of the effects you see are post-production. The tune starts near the 1:33 mark but the set-up is interesting, too.

Here’s how it looked to a fan at the venue.  The video from the stream is cooler, but the live effects aren’t bad and fit the music well.

And, here is Cynthia Breazeal’s talk “The Personal Side of Robots” from SXSW Live:

Get your Dickens holiday fix in Second Life this Sunday

I need to mail a big pile of packages, and the week before Christmas, that is bound to be more horrifying than the Ghost of Christmas Yet to Come. So, I’ll share a press release for a more uplifting event! I have family obligations this Sunday and won’t be able to attend, but if you’re free and need a dose of classic holiday cheer, please consider stopping by.

Imagination Island, Second Life – StoryFest Events, which began with a single story-based weekend in March 2010, will be closing the cover on event production with one final live literature event: Fezziwig’s Ball. Storytellers will gather on Sunday, December 21st beginning at 11am SLT to present the entire text of Charles Dickens’ classic holiday ghost story, A Christmas Carol, followed by a dance party with tips benefiting the Community Virtual Library. http://maps.secondlife.com/secondlife/Imagination%20Island/189/154/22

“It has been a fascinating ride and we have had many tremendously successful events.” explained Caledonia Skytower, StoryFest Events Director, “Not everything lasts forever, especially in the virtual world, or can continue in the same form.  We’ve gotten to the point where it has been clear we needed to evaluate where we were going, and what we needed to become.  It’s all good news, actually.  These sorts of celebration events will continue. It is simply that StoryFest Events as a production entity is no longer necessary.”

StoryFest Events has produced StoryFest, Bard on the Beach, and BOOFest for the last four years, and in 2012 added The Dickens Project. Fezziwig’s Ballis a condensation of the previous Dickens events, featuring many of the voice performers that have been a popular part of StoryFests over the years: Dubhna Rhiadra, Corwyn Allen, Kayden Oconnell, Aoife Lorefield, Shandon Loring, Freda Frostbite and Bhelanna Blaze as well as Skytower herself. As a sign that this is a transition and not a finale, John Morland will be introduced as a new voice among the cast of readers.  “I am really excited about John joining us for this.  He has a nice style and tambour that is a good compliment to the other folks we have,” Ms. Skytower added.

A Christmas Carol will begin at 11am with “Stave One: Marley’s Ghost” presented by Loring and Skytower, and will proceed with a new section of the text each hour, as performers pass the baton from one reader to the next, as Dickens’ ghostly story of Christmas and the redemption of a soul unfolds. Following the conclusion of the story, Dubhna Rhiadra will be spinning some wonderfully appropriate holiday music as storytellers and story lovers dance in celebration of four years of great, storied events.

For details on the presentation schedule, visit http://storyfestsl2011.blogspot.com/

All story presentations will be live in voice.  All the performers are volunteers and the sessions are free to all Second Life residents.

StoryFest Events thanks The Community Virtual Library for providing the venue for the event, and for their support of the debut of The Dickens Project in 2012. Many thanks also everyone who has been so incredibly supportive of StoryFest Events over the past four years, including: Crap Mariner, Inara Pey, Branwen Arts, Lizzo Dreamscape, Equinox Pinion & Denis Lagan, and Thinkerer Melville PLUS all the great storytellers, readers and performers who have been a part of Storyfest, Bard On the Beach, BOOFest, and The Dickens Project— It’s been a fabulous time!